A recent network change in my home led me down the rabbit hole of how transceivers convert SFP+ to RJ45/Ethernet and SFP+ modules.

My goal was to determine if an SFP+ transceiver’s power conversion is less optimal 24/7 than a baseT NIC (like an X540-T2). I did not get a clear answer from Google, Reddit, Discords, ServeTheHome, and more. Most of the time, asking questions about any 10Gbps and copper gets you back an answer like “Fiber.” Often unhelpful and defeating the purpose of exploration and curiosity.

My conclusion at the end of all of this is:

The top 10GBase-T SFP+ transceiver I would recommend is: 10GTek 80m (Broadcom) and my runner up would be the Wiitek 30m (Marvell)

So here’s some background that led me here, and some more information about the transceiver modules I tested.

The home layout is:

When I first set up a new Aruba 1930 switch, the connection between the server room and network room negotiated 10Gbps over Ethernet using SFP+ transceivers on the switch. I was using, initially, the 10GTek 30m SFP+ to Ethernet transceiver. Unfortunately, the run to my office’s Mac Mini over Cat6A was only negotiating at 5Gbps and was struggling to receive at a rate above 2Gbps (it could send at a full 5Gbps). I tested that same 10GTek 30m transceiver using the older Cat5e run to my office’s Mac Mini and negotiated and achieved a full 10Gbps connection. So something was/is wonky about my Cat6A… I think it is the length.

I found that some transceivers run wildly hotter than others. My ipolex runs noticeably less hot than my 10GTek transceiver of the same rating (30m). Data flow impacts the heat. But generally found ipolex ran the hottest (measuring with a hopefully accurate temperature gun).

And I also learned that the way in which a transceiver is used in a switch is to spoof the transceiver code, so the switch thinks the transceiver is something it is not. So when you are clicking “HP Aruba” or “Unifi” on those Amazon pages, what you’re doing is getting a transceiver that has been encoded to register in those switches as a valid component. But here’s the kicker, some switches don’t support the RJ45 transceiver, so the unit gets encoded as a LR or optical module.

This can have unintended side effects, too. If a switch claims it only works with certain kinds of optical modules and a 3rd party has encoded their module to “fake it,” you can end up in situations where the switch is doing things that would be OK for the intended module but not okay for a spoofed module.

One of the most helpful reviews I found was from an Amazon review of a Fiber Mall SFP+ transceiver by a person named K:

Long review but was worth it for me to understand the different module chipsets, too.

My other big takeaway is that the Aruba 1930 is not picky on SFP+ modules. This is wonderful for me as a new owner of one!

On placement of Copper SFP+ transceivers, I found this web site helpful:

S+RJ10is a unique 6-speed RJ-45 SFP+ module that is based on a Marvell 88X3310P transceiver. It offers up to 10 Gbps speeds using twisted-pair copper cables. All of the current MikroTik devices that have an SFP+ cage support the S+RJ10 module. Th...

Particularly, this layout (from their site):

I found another Reddit thread touching on the Broadcom vs not topic: https://www.reddit.com/r/networking/comments/d9hwpj/there_are_now_80_meter_10g_rj45_sfp_modules_whats/ 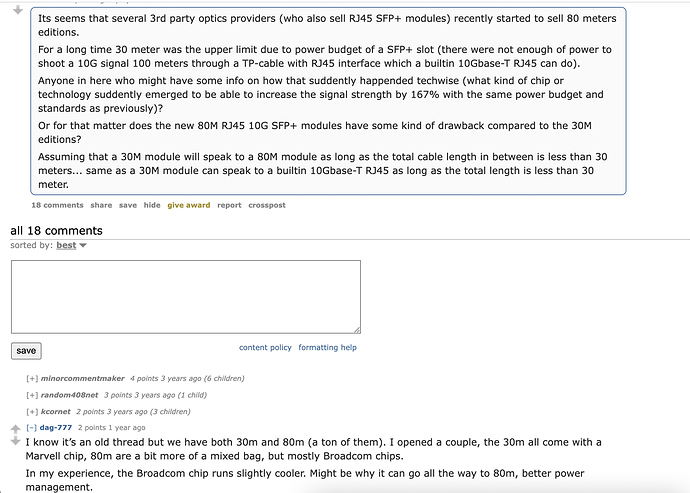 I was also able to find this chipset, supposedly, on Amazon for non-Aruba (but many other brands) and fairly cheap: https://amzn.to/3DDIcoB 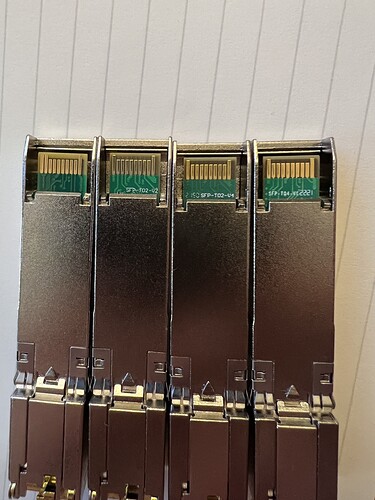 I’ve picked up a couple of different 30m/80m adapters to test with:

I have now had a chance to test all of these modules.

For each transceiver, I used the following test setup:

TLDR; 10GTek 80m SFP+ to RJ45 performed perfectly and was priced within 10% of 30m modules. The Fiber all 80m performed the same as the 10GTek 80m module but is 2x the price as of writing this. The Wiitek did similarly well and is slightly cheaper and rated for 30m. But I think it important to make sure your switch recognizes the device fully (see below) and if you can get it coded for your device I would do that.

I believe the Ipolex 30m and the 10GTek 30m devices are the same. They have all of the same markings and label themselves “ASF-10G-T” They both would not negotiate >5Gbps over a (very likely) ~30m Cat6A run. They could not push data over that run >2Gbps. They received data at 5Gbps. On my shorter Cat5e run, they negotiated at 10Gbps and achieved the full 10Gbps throughput well.

The 80m adapters (Fiber mall and 10GTek) performed perfectly on all connection configurations and speed tests. They both look identical concerning manufacturing and board markings: 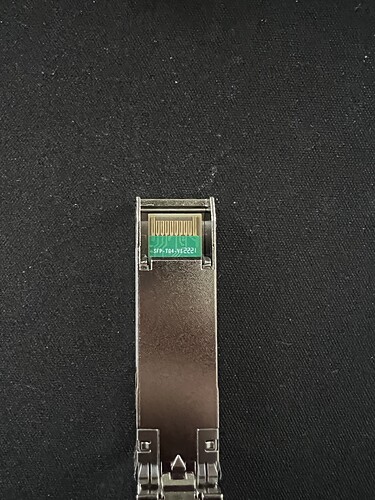 As I dug more into the Aruba’s handling of the SFP+ port, I noticed an oddity. In the UI you can hover over a green-lit port to learn about its details:

The UI when you hover over an inactive/down port: 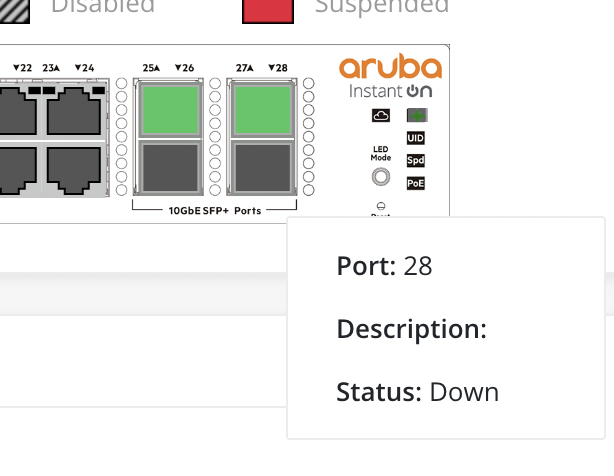 The UI when you hover over an active/up port (notice the SFP+ to RJ45 transceiver module claims it is a BASE-SR): 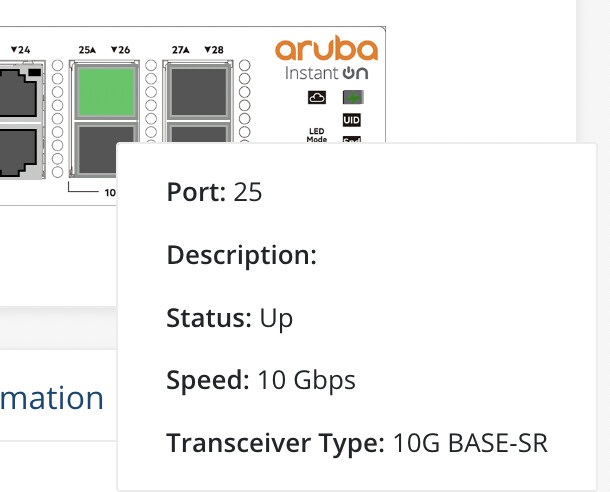 When I looked at the 10GTek 80m transceiver (not coded for Aruba, just a generic module), it will negotiate but you might see this UI: 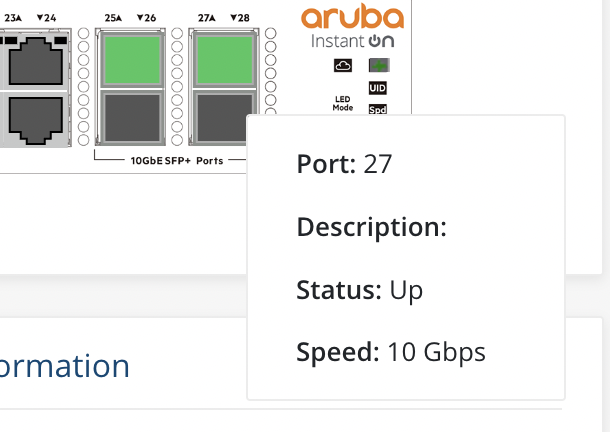 I noticed immediately following this UI, if you refresh, you will not longer see any popup on hover. All green network ports have no user interaction. This seems worrisome to me. So I pulled the 10GTek 80m module and put in one of the Ipolex 30m modules and noticed that it, like the Wiitek, also showed BASE-SR: 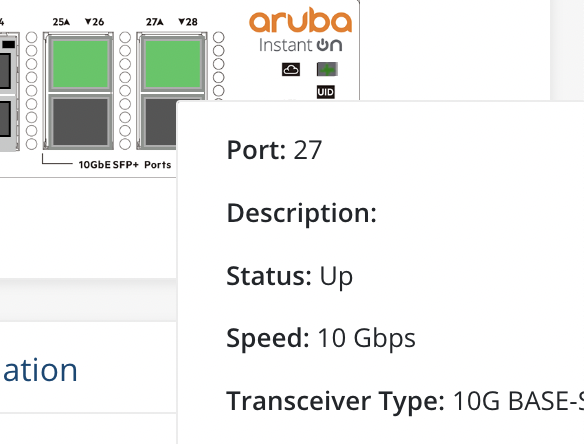 I am not quite sure why this happens but my suspicion is that 10GTek 80m adapter was not coded properly. The Fiber Mall 80m, if I recall right, did show BASE-SR. I have already returned all of the test modules so unfortunately I can not reconfirm some of these suspicions.

I’ll stick with using the Wiitek for now.